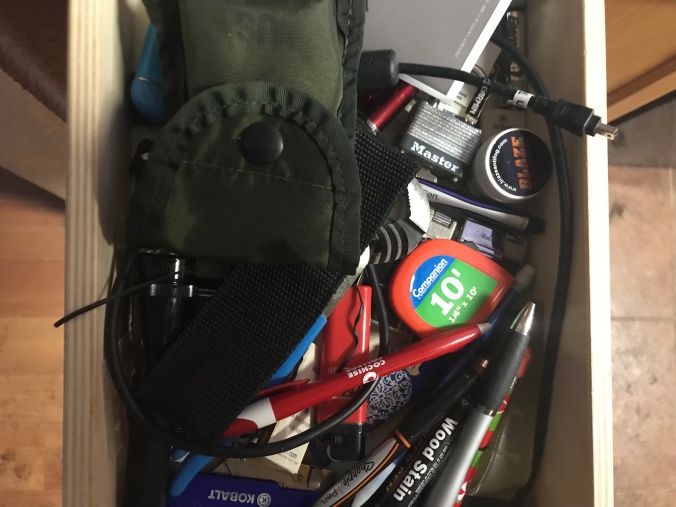 Notice the photo above? Yes, that’s what I call, as well as most people I know, a junk drawer. They seem to be ubiquitous in most households that I’ve ever been in, and like myself, the homeowners do nothing but complain about having one.

I did start this drawer with the best intention: Just to keep a few tools nearby for a quick repair if needed. Pliers, the multi-tool yes even the flashlight were all originally in the drawer. But then it became a place to just dump things I didn’t have a clue as to what to do with at the time, always thinking, “I’ll put it where it belongs, later”.  Later never came.

Look at that green thing. It’s actually a military issue compass. Why on earth is it in that drawer and why did I ever place it there? I can’t recall but there must have been a time, in the distant past, where I had it out for some real purpose. Or maybe I was just showing it off to someone and then, instead of placing it back where I originally retrieved it, I just stuffed it in the junk drawer where it’s remained ever since.

The cable in there, I have no idea what it’s function is, or was. I’m sure with time I can determine it’s use, but it’s been there so long, never used, that probably tossing it wouldn’t be a bad idea. All of the pens, and other stuff in there, just a dumping ground for all of the stuff accumulated, that I thought I might actually need sooner or later.

As it turns out, I need very litle of what’s there, with the exception of the tools. And what’s with the multiple multi-tools in the same place? No idea. Of course, I don’t even require the tools there as just a few steps away from that drawer is the garage, where I have a large toobox, on wheels, with most hand tools I would ever need.

It’s not as though I need the space in the kitchen and that may be why I’ve never taken the few minutes to clean that drawer out.  Maybe it’s time though. I am writing about it and it would only take a few minutes to trash a lot of what’s in there, and those that I want to keep? Place them, like the tools, back in the garage where they belong.

I should actually do this sooner rather than later. But then, later is never a bad choice for something like this, is it?

2 thoughts on “The Detritus of Life”