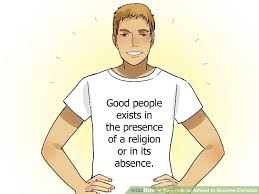 Does being atheist make any of us  better human beings? If, let’’s just say in America, if we were majority atheist over any religion, would we be a better country to our neighbors than we are today? I don’t think so and I have no but I also have no reason to think that it might. Atheism is just a non-belief in god(s) and doesn’t inform us in any other way. Every political or social belief a person may have  who is an atheist, is in addition to their atheism, not because of it.

There’s no advantage to being an atheist, at least not in our current environment as atheists are less trusted than rapists. That’s not new, but it’s still  interesting and tells us more about the people surveyed that it does and atheists, of course. Not believing in some sort of god seems to be unthinkable to a lot of people, whether they actually worship that god or not. I know a lot of people that claim to be “Christians” but never seem to find the time to go to church. Ask them about something in the New Testament and they have no idea as none of them have actually read that book.

What about the rise of the non-religious? I keep hearing about this demographic but what does it really mean? Of course, Atheist organizations tout it a being some sort of sea-change in society but is it? Does this mean that more people are, over time, rejecting belief and accepting atheism? Well, not so much. Ask any of those that say they are non-religious. I have. My sample is small but when I have asked what they mean by beibng non-religious, it has nothing to do with atheism. It’s that these people have rejected the religious traditions they were raised to believe: Catholic, Muslim, Judaism, or any of the thousands of Protestant denominations that exist

More specifically, ask any of them if they believe in god. I have and I have received one of two responses:  Yes. The person, although non-religious, still believes there is a god. The other response sounds like it came from a pamphlet but basically says the same thing: No, but they do believe there is a higher power, that guides the actions of humans.  I think that translates as a belief in some sort of god.

I would say that most people I know are religious and most of them are very nice people. I would make the same statement about atheists that I know as well. Some people, religious or atheist, I try to avoid. Why? They’re not thieves, rapists or murderers, just, in my view, not very ethical.No matter the state of belief, I attempt to not associate with people that are of the do as I say, not as I do category. We all probably know people like this and may have a similar view towards them. I don’t think any of us go through any radical change when we become atheist. We are who we are. Certainly, like anyone else, we are able to change, grow, mature, whatever we want to call it but essentially, I think, are the same person were before atheism.

There’s nothing special being an atheist nor is there not being an atheist. A better world or country if there were more atheists? I can’t say for sure but I don’t believe so. I know atheists that say they are happier since leaving belief behind, but that’s not the same as being a better person.

8 thoughts on “Are Atheists Better than Non-Atheists?”