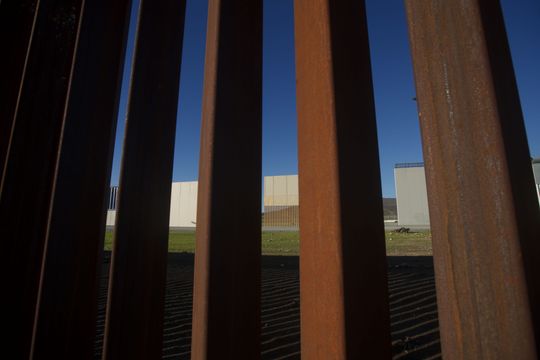 As we’re into the 3rd week of a government shutdown (Has anyone really noticed? Are you still receiving mail, and any other government services? Yes, yes, you are.) there should probably be some clarity on what the wall represents: a deterrence. That’s all. It won’t prevent every person south of the border from entering, but it will deter many.

I live fairly close to the U..S. Mexico border. As I sit here on my patio this afternoon, I can look directly south and not exactly see Mexico, but I am able to see a mountain that separates us. No, a wall here would be ridiculous, but that over 7,000 foot peak has never prevented any human traffickers or drug smugglers from attempting to enter our country illegally.  It’s a beautiful area, but as residents we are warned by the Federal Government that hiking in that mountain area is risky.

In fact, when I first moved here some years ago, I spoke with some colleagues at work about hiking that area. One told me, “Don’t go there unarmed”. I thought he was kidding but as I later discovered, he was correct.  The number of people crossing was a one point enormous, hundreds per month. Even though those numbers today are less, it’s not because people aren’t trying, it’s because we have more Border Agents than when I first arrived. Coming across the mountain pass is a difficult journey, and with the increased presence of law enforcement, have forced the traffickers to use other means to bring people into the country.

Back in 2008, I was returning from a short vacation with my family, driving home from the airport when my wife noticed off the Interstate, a van that had crashed through the barrier on the other side of the highway and was on it’s side in a field. That evening, watching the local news, we learned that the van was filled with 24 illegals and that they were avoiding Border and State law enforcement. They raced to avoid being stopped, crashed, and out of the 24 in the van, more than half died. The others had to be air lifted to the hospital. That’s the human tragedy that we rarely hear about.

Every year. Every year, there are local stories of bodies being discovered in the desert of people who perished on the journey from dehydration. The trafficker has his money, so why do anything to help that one dying? Again, it’s the human cost of those attempting to enter, and the lack of humanity, not of the U.S. government, but of those traffickers that abandon those people to die in the desert.

Just a few years ago, in Nogales, AZ. , not that far from where I live (about an hour) there were multiple murders that occured, by a drug cartel, of American Citizens. People that were engaged against those cartel members bringing in drugs to our country. Brutal murders: beheadings and burning people alive. It prompted the government to bring in a heavy law enforcement presence to that city. I’m betting most reading this never heard these stories. Of course, you won’t see them on the Open Borders Networks.

We will probably never be able to prevent all illegal entry through our Southern border, but shouldn’t we, as a sovereign nation, do what we can to try and prevent that which has become a crisis in that it’s no longer just young men crossing, but entire families? Should we be seeing stories, as we have recently, of young children that have died because they went days without water? Of course, our law enforcement is blamed, but how could anyone allow a child to walk for days without giving them at least water along the way? Well, we here, at the border know who’s to blame and it’s not our Border Agents that risk their lives daily.

I’m certain I’ll receive some negative feedback from this but I thought It needed to be said.  I’ll continue to say it, to demonstrate that it’s not racist to want a border wall. It really is about protecting the citizens of this country, and even more, preventing those that exploit those innocents, for money, from causing more needless deaths. We need to do whatever we can to prevent not only the mass illegal drug importation to our country, but to do whatever we can to discourage those trying to cross illegally, for whatever reason, and put an end to this ongoing human tragedy.

5 thoughts on “Should We Build the Wall?”