As many may know, The Washington Post was recently sued by one of the Covington Catholic School students (Nick Sandman), for defamation. The amount of the suit is reportedly $250 million. Of course, large media companies have insurance for these kinds of suits and although settling would probably increase their insurance premiums, it would probably not put the organization in any financial jeopardy. After over a month, The Post decided to issue an Editor’s Note, most likely based on the suit filed probably thinking it may somehow ameliorate their responsibility that would translate into damages. 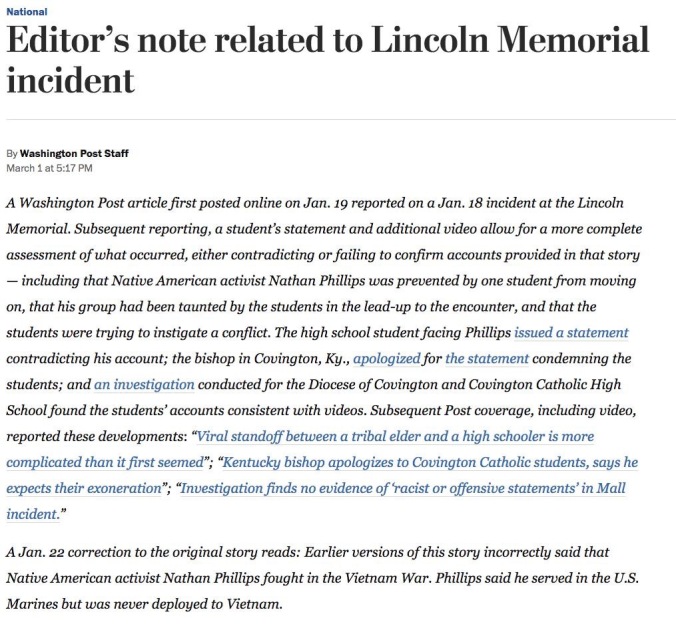 Not exactly an apology, and it took more than a month for them to issue this. I hope the lawsuit isn’t dismissed by a judge, and I would like to think that all media that published or broadcast a false story based on a 30 second video have to do the same. Then there are the celebrities that  chimed in making awful statements on Twitter, calling for doxxing and actual violence against these students.

This is a start though and maybe (doubtful) publications, broadcasters, and individuals will be careful before making accusations that are not backed up by any actual facts. Finally, The Post also mentioned that they have deleted this tweet, based on an interview with Nathan Phillips, who was a bit short of the truth:

It’s actually too bad that a major national newspaper had to be sued for publishing false information. It really says a lot about the state of media, at least here in the United States, based on nothing more in the last couple of years than they hate Donald Trump and look for any incident, any, to portray him or any possible supporter, even a teenager, in a bad light.

One thought on “Under Fire, WaPo Attempts to Correct the Record”