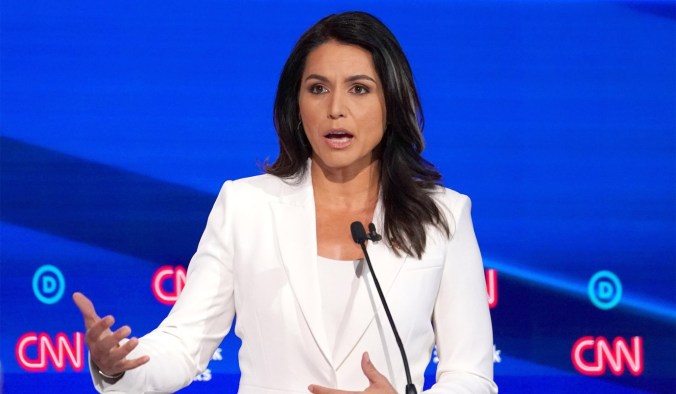 I noticed someone on Twitter, earlier bad mouthing Tulsi Gabbard on her stance of the United States and regime change. This, I think was some journalist, I honestly don;t recall because I read it, and immediately dismissed the view. Why? None of those that desire an active US presence in Syria have any understanding of what combat operations actually mean. Sure, iut’s easy to say we should be there protecting the Kurds, and I am a supporter of them, but, years before we ever had troops in Syria, it was the Kurds that were directly in conflict with ISIS – while our government described them as “The JV Team”.

I wrote this piece a bit ago and I stand by it, We need to come home. We cannot, alone, be the police force of the world and our President has made that clear to everyone. What we need is a policy that, in conjunction with our allies,  states specifically what our involvement will be in any country around the world. Those allies must provide troops, logistics, and intelligence. We’ve been the one country that for too long, everyone else decided, that we would not just lead, but place our treasure ( our men and women) in danger, to solve the worlds issues.  We’re tired. We need a vacation, as a country. How about our NATO allies handling situations in their own backyard? Of course, we’ll be there if required, but it shouldn’t be a given that the US will take on every instance. every country, by ourselves.

I go back to Libya, where according to President Obama, we would “Lead from behind”. What does that mean? All that happened when some NATO allies, along with us, blew the hell out of that country, was to start a mass migration from North Africa, to  Europe. That’s it. Terrorism was not abated, in fact, terrorism increased not only in North Africa, but around the world.

500,000 Syrians died during the last administration. No one cared. Well, that’s not true. Regular Americans were appalled, but there was zero interest, from our own government, to be involved. There was once a red line drawn, by our own President, but when that line was crossed? Nothing. So our current President sends in troops to defeat the “ISIS Caliphate”, does that within months, and now wants to remove those same. What’s the consensus? We can;t leave our allies, the Kurds, alone. But again, they were there, long before us., fighting. Should we leave them to their own fate? Of course not and we can do a lot supplying arms, ammunition, and food to assist them in their struggle. None of that requires we have actual combat tgroops on the ground.

That Tulsi Gabbard has said, no more wars for regime change rings a bit hollow from those same, just a few years ago, that condemned that exact approach. She’s right. Her critics., left and right are wrong. Ot’s easy to look at those two wars, we’ve been involved in for nearly two decades., Iraq and Afghanistan. Some of us know what this means.

The people of this country need to decide, and they will in 13 months, whether they want endless, multigenerational war, or not. The Democrats, on stage the other night? All were for these endless conflicts, with of course the one exception: Tulsi Gabbard, the only one on stage that actually knows anything about combat operations. Yers “Mayor Pete” was in the Navy and in Afghanistan for like what? Two or three months? Just putting on a uniform does not make you an expert.As a conservative, I really like Tulsi on her approach to foreign policy. Would I vote for her? I’m actually unsure. I might, simply because her stance in foreign policy mimics  mine; But then so does Trumps.

If I were a Democrat, in the primaries, I would vote for Tulsi. where I live, because I’m not a registered Democrat, I can’t. If you’re a Democrat that doesn;t look at the “top tier” folks as being anyone that could possibly win against Trump ( that would be zero, today), the vote for Tulsi. Really. Vote for Tulsi Gabbard. The most honest person running for President on the Democrat side.

One thought on “Tulsi Gabbard? Maybe”