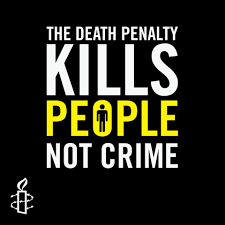 The State of Arkansas is about to execute eight men, between the 17th of April and the 27th of the same month. Why? It’s not just that these men have exhausted their appeals. From my reading, each of these men (4 black, 4 white) are actually guilty of the crimes they committed.

The reason that Arkansas has decided to execute these eight is nefarious: a drug they use for executions will expire at the end of the month. Yep, that’s the reason.The Governor, Asa Hutchinson, actually made that statement.

Eight men will die simply because a drug required in the execution process will expire and the State may not be able to replace it.

You may or may not know that there are drug companies that currently refuse to sell those drugs to states that implement the death penalty. More and more of these companies do not wish to be associated with this horrific punishment.

We need to end this barbarism. We need society to recognize that yes, people need to be severaly punished for certain crimes, but killing them is not an answer. The death penalty doesn’t stop the psychotic from his or her crimes. Don’t believe me? Look here.

We have a voice. We can make certain that people are appropriately punished for their crimes without resulting to killing them.