I’ve been meaning to write about this for a while. Do GMO’s present a danger to humans? I’m not a specialist in this field and I’ve not written about this subject simply because I expect some to criticize me that I have no background here. But I can read, as well as anyone else, and I think it’s time for all of us, to take another look at this controversy, most notably skeptics.

I go to the grocery store at least weekly and I’ve come to notice that almost everything I buy, has the notice on it that it’s non-GMO. Why? Where does this fear of science come from? There are absolutely zero scientific studies of genetically modified organisms that have been proven to be harmful to humans. None. Yet, there is a rising belief that there is. It’s no different to me than those  that are anti-vaccination . There’s no proof,  any study, ever, that vaccines cause autism, but because a few people, so-called scientists claim a relation, suddenly we have a resurgence of childhood disease that were once essentially eradicated.

Back to the grocery store. Walk down any aisle and notice how many items on the shelf proclaim that they are non-GMO.  Pretty much every cereal box anyone buys will state that on the box, yet those same manufacturers have no problem with the sugar content (unless you’re eating plain cornflakes or something similar, all of them are loaded with sugar). That seems to be okay with those anti-GMO folks.  Even tuna. Yes, you read that correctly, Tuna companies are now probably virtue signaling that their products are non-GMO. Here’s a photo I took recently of a can of tuna: 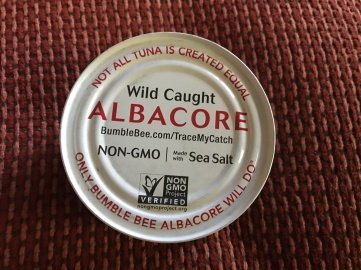 There are grains, genetically modified (e.g. wheat and rye) that require less water, for those countries that receive little rain every year, and those same have been modified to resist pests. Think about that. Using less water to grow crops and also resisting infestation which allows for a better crop, without having to use pesticides! Think about that the next time you’re in the store buying anything. Go to the fruit/vegetable department: all of those have at one point been sprayed with pesticides. Does anyone think that just taking those same through a rinse removes those chemicals? But that seems to be okay with the anti-GMO crowd. Pesticides: good. GMO’s: bad.

I know what some are going to say: buy organic. Even those farmers use some sort of pesticide.They have to or they’d not be able to stay in business. Have we collectively lost our minds? It certainly seems so and it’s time for skeptics to start writing and speaking out more about all of these questions where a powerful minority seem to have an overwhelming voice in our lives.

Are GMO’s bad for us? All of the evidence to date says an affirmative NO. That doesn’t keep some from braying about it constantly, and having those that provide our foods from becoming virtue signalers.

5 thoughts on “Are GMO’s the Death Sentence We’re Lead to Believe?”