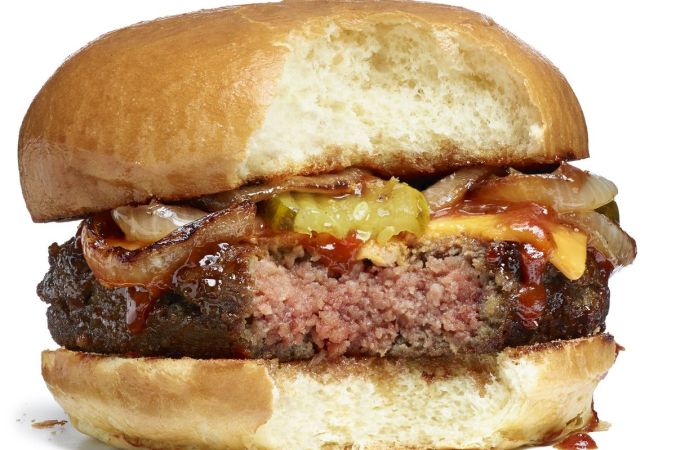 A little while ago, I wrote this piece about everyday products, in this case burgers, going vegan or at least vegetarian, Meatless burgers. I wrote that I had tried one brand and that they were actually tasty. Not that I want to give up meat for these, but that there was in fact, nothing wrong with them, from a carnivores perspective. I haven;t bout anymore , mainly because when we go to the store, and I think about it, my daughter gives me a “scrunchy face” which indicates “No”. I asked her why and the response was simple: They’re not meat. None of these products have or even claim to have the protein in a simple four ounce serving that meat does.  Also, as I discovered while doing an Internet search on the subject, that none of these substitutes were healthier than just eating meat.

That actually surprised me, but numbers don’t lie and that other than having less protein, they had the same or in some products, higher amounts of  cholesterol, and of course carbohydrates. So, anyone wanting to control wither of those in their diet?  It would be better to just eliminate it entirely from the diet. What I learned was that there are give and take in this as there are in anything anyone wants to do to change their life.

I’m guessing we’ve all seen the commercials  of Burger Kings’ “Impossible Whopper”. I don’t believe I can have the television on at any point during the day without seeing  it at some point which indicates to me that these “burgers” are actually selling. Recently, Burger King was sued by a vegan because, get this, that vegan burger was prepared on the same device as meat burgers, contaminating them, or something.   I don’t expect this lawsuit to go anywhere but I thought it interesting that a vegan would be dining at a Burger King. I don’t know what was expected as all the customer is receiving is a meatless burger. In fact, it has mayonnaise on it.  What’s the main ingredient there? Then there’s the bun, which is probably the same bun they use on every sandwich  they make. Maybe the vegan should just go somewhere else?

Is this hilarious or what? I think of it as an Orthodox  Jew going there and expecting the meal to be kosher. I don’t think so.

Of course just like with being anti-GMO, food producers are going out of their wat to attract a certain segment of the population to their products. Heard about the new vegan butter? No, really, butter made strictly from plants. Yes, it’s on your television. They even have the nerve to refer to it as butter. Sorry, it’s not butter. I actually wouldn’t be surprised if some Dairy Association made them change their claim that this is “butter”. Any moment now. What I would encourage everyone to do is to take a look at these products. Like everything, they have Nutrition Values, and decide if any of these are better for you than the “real”  thing. You may be surprised to discover that it’s all just hype and that none of these will prevent a heart attack or stroke, or anything else. In fact, some may be worse for you.

All of this comes down to believing the hype (marketing)  of trusting your own judgement, Are you willing to pay more for something that will only make you feel better or would it be better to just look at your diet and decide that maybe you’ll eat less of something than you do today? Instead of allowing that same marketing department to imply that their new product is better for you, why not investigate and determine whether or not, claims aside,  that in fact, it is better got you?

One thought on “Better, Worse, or No Difference?”