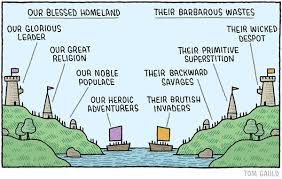 I don’t identify with any “tribe” as we’ve come to know them. Yes, I’m an atheist, and those that read here regularly, a conservative. But neither of those groups, atheists because I’m conservative, and conservatives based on being an atheist, accept me as one of their own. There was a point when that bothered me, but that was a long time ago. I’d rather be my own person than feel I have to in some way, compromise myself because I have a need to belong.

I discovered years ago that no matter what I did, would I be accepted simply because I refuse to accept those precepts that I just don’t believe. So I sit here in the wasteland, and I do not think I’m alone. Too many today feel forced to choose a side and those that refuse to are relegated to the status of being non-persons. Yes, that’s true. Have an opinion outside what a certain group approves? Have the temerity to think for yourself instead of buying into an ideology of any kind? Be ready to be de-personed.

Why is it so important for some to have to associate with a particular group?  Do any of those same people, because they believe it’s important, modify their views just to belong? Of course they do. I think it’s perfectly human to want to join a tribe, even if  in joining, a person may have to agree with positions they otherwise would not have.

There’s a need for people to associate with one another. That’s why it’s known as tribalism. At what point does that become a negative? Well, it’s simple: When people are not allowed to deviate from the tribe’s dogma. And yes, whether you’re a progressive or a conservative, being a member of that group means buying into their dogmatism.

I won’t do that. I don’t care about any specific group to the extent that I will buy into their nonsense just to be accepted. I’ve long moved beyond caring what others think about me. If I spent my waking days considering just that, I’d never be able to get anything done. I’d be worried about what someone thinks I write about, or tweet. I don’t.

It’s easy to let someone else tell you what you should think or believe because it takes all of the responsibility away. But is it the right thing to do? No one should allow anyone else to hijack what they believe and of course should never allow anyone else to speak for them if they may happen to disagree.

We’ve come to the,  if your not with me, you’re against me time where there’s no longer any discussion or disagreement allowed.  We’re at a point when people are accused of heinous acts, and even though there’s proof to the contrary, that the proof doesn’t fit the predesignated narrative, sometimes the truth never reaches the public and that same tribalism becomes more entrenched.

It’s time to start rejecting those absolutists in our midst and make the attempt to have an actual dialogue with those we may have disagreements with.  We may discover we have more in common with each other than we’re meant to believe.