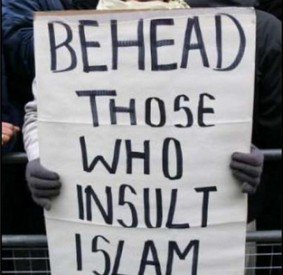 Should atheists spend as much time critiquing Islam as we do Christianity? I don’t see why not.  Of course as soon as someone does, there’s always the charge of Islamophobia, or even racism against those who would dare to stand up and say that, in many cases, Islam is actually a more repressive religious belief than any other. I think that we need to reject the term Islamophobia; When I was in school, I was taught a phobia was an irrational fear of something.  I personally don’t fear Muslims, and I think that most people have substituted , or added, hatred  in the definition. As for the charge of racism, Islam is a religion not a race, so I reject that as well. I’ve never been accused of being Christophobic or a racist for criticizing Christianity, but for Islam, it is a weapon to silence those who may have legitimate questions about the self proclaimed Religion of Peace.

In ten countries, all Islamic, a person may be put to death for being gay. Those same countries may imprison or sentence to death someone for apostasy. A woman, who’s been raped, has to have at least four  male witnesses to convict her rapist, and even then, it’s the woman that’s eventually punished.  Some of these same countries still practice stoning, for adultery.  These are just a few of what I would call horrors inflicted upon their own citizens.

As much as there is to criticize Christianity, Islam is a much more intolerant belief system.  In my experience, most of those apologists for Islam, have never actually spent any time in an Islamic country. I’m not referring to a vacation in Dubai, but a few months in Kuwait, or how about Pakistan?  The same apologists may come back with a different view. I’m not trying to paint all Muslims with a broad brush, just pointing out that those same governments are oppressive.

I think that atheists in the West, especially the U.S., could probably spend more time being vocal not just about Christianity, but Islam as well. After all, together, both of these religions comprise nearly half the world’s population.  Many atheists have read the bible, or major portions of it, but how many of us have delved into the Quran? I know very few people that own a copy, yet these same people probably own two or more copies of the bible.

Maybe it’s time for us to start going through the holy book of Islam the way we do with the bible. We could all do with a little education and less apologetics.