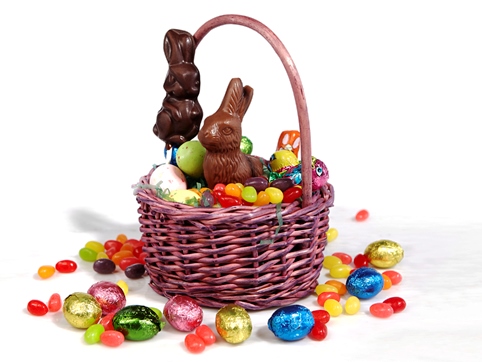 Is Easter actually a pagan celebration appropriated by Christians? There’s a lot of debate about that idea,  but there’s an undeniable fact that just as the Christmas holiday is clearly expropriated from the pagan winter solstice celebrations, it does make sense that the same would occur in the spring, which was a time of renewal for ancient peoples. The celebration of the renewal of a god, may have been a way to move the populace away from their spring fertility feasts, to the more sardonic dead man rising from the grave worship.

None of that explains though, the idea of the Easter bunny, and baskets, which according to many sources, is in fact rooted in the same pagan tradition. Of course, there are those that claim the idea of the Easter bunny was introduced by German Lutherans, but there’s no proof this happened. Others say the bunny itself a symbol of fertility, was meant to represent the Virgin Mary (no kidding!) as, because rabbits were so fertile, there was a time when it was thought they reproduced asexually. there is even some later Christian art which shows depictions of what is supposed to be Mary, with a rabbit! This seems a bit too far fetched I think for even the most conservative of believers.

What about the eggs associated? Even early Christians had to have known that rabbits do not lay eggs so where did that come from? Some will claim that it’s a product of Lent, where people were  people were discouraged from consuming them and so after Lent, ta-da! eggs. But again, there’s little scholarship that would acknowledge this and that which exists appears more apologetics than actual scholarship.

I didn’t include any links here on purpose. There’s a lot of information online that supports the various views of the origins of Easter and depending on whether or not someone is a believer will of course taint  the viewing perspective.

As we all go about our individual Easter celebrations, does any of this matter? Probably not, but it’s interesting, at least to me, to think about the genesis of what we now refer to as Easter – minus the zombie effect.

I hope everyone enjoys the holiday. In this house, it’s celebrated not only with Easter baskets, but a nice, early afternoon meal consisting of baked ham, with all of the traditional (from my family) fixings. Food and laughter with family, and maybe a friend or two. I think that’s more important than attempting to convince anyone of what I personally believe about the days’ origin.

One thought on “The Origin of Easter”