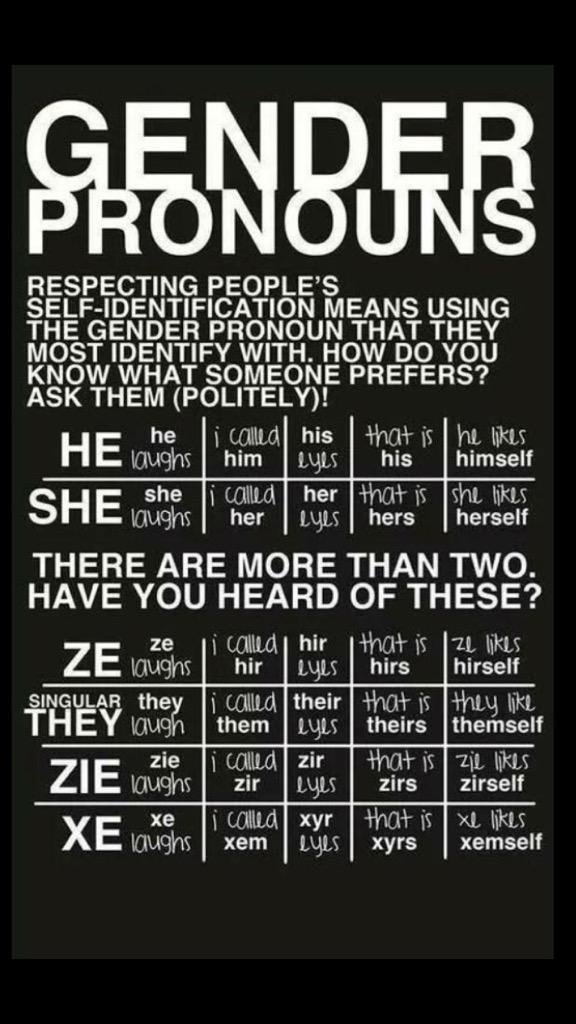 I just watched a terrific video from Blaire White on being misgendered. I think it’s spot on and makes a lot of good points about the current use of they/them, xe/xir, etc., for those that may declare to be non-binary or gender fluid, or whatever else it is out there. I wrote a while ago that maybe instead of taking the chance of misgendering, therefore insulting someone, I should just use the pronoun it. Yes, that seems proper for every occasion and I won’t take the chance of hurting someone’s feelings. Yeah, like I care.

In the video, Blaire shows clips of a guy (oops!) that says when he meets someone for the first time, “Hi, I’m [name]. My preferred pronouns are they/them…” and then continues to introduce himself (oops again!). That’s just silly and goes to Blaire’s point of the video of where were heading in society. Think about it. I think I’d like to be referred to as a white, heterosexual male. So, when you see me, you’ll automatically think of that ad if you introduce me to someone else, you should say, “This is Jim, a white heterosexual male”.

What’s also disturbing, a bit in the video, is that the same person, in another clip, says that those that use he/him as pronouns for “him” (there), are making a judgement and people should never do that. No it’s not a judgement, it’s an observation, If you see me walking through a grocery store, it’s natural for anyone to observe that I am a man. I look like a man, dress like a man (that actually isn’t important) and the few seconds of observing e in some aisle would give you no reason to believe anything else. How would you know if I am non-binary or something else when your eyes, transferring that information to your brain, tells you something different? Short answer:  it wouldn’t.

People, however, are given to making judgements about others they don’t know, simply from appearance. Maybe I should say, jumping to conclusions about another. Years ago, I decided I was going to go vehicle shopping. I wanted a new car. I had decided on the dealerships I wanted to visit that day, and proceeded to the nearest, first. I saw the one I wanted at this Nissan dealership. So, I was looking at it, checking out the sticker on the window for the price and the options it came with, thinking any second now, a salesperson would be out and I could begin discussing/negotiating. Sire enough, a salesman did come out, and walked right by me, although I had been there for at least ten minutes, if not a bit longer, and immediately aimed for this young couple, who had just arrived.

Why did he head for them? Clean cut, nicely dressed…that’s all I could determine. Me? Longish hair, a short beard and in sweatpants and a T-shirt. My first thought was that he had profiled me as being someone that was just looking and not a prospect for a sale, based on how I appeared. No one else came out in the next two or three minutes, so I of course left.

People do make judgements, I just don’t think they do that with someone’s gender. What you see is what you get. A person in the grocery store, or on a dealership lot, with a beard, anyone would believe is a he/him. I agree with Blaire in that it shouldn’t be the responsibility of the stranger to identify you by your preferred pronouns, but yours to actually become whomever it is you’re attempting to become. When you introduce yourself and the first thing out of your mouth after your name, is to tell that stranger, how you prefer to be addressed? See ya!

Maybe, in the incident I described above, should have stopped that salesman as he passed by and said something. Today, I would definitely do that but back then, I wan’t very confrontational and besides, there were other dealerships that probably did want my business (the very next one, in fact, a Jeep dealership). Were my feelings hurt? No, I was perturbed, but that’s about as far as it went. The same can be said with misgendering someone. Although the salesman bypassed me, I believe, based on a faulty conclusion , I don’t believe anyone misgenders another person based on anything other that what they observe at the time. Its not a judgement. it’s a lack of knowledge and it’s not up to that person to assume anything other than that which is easily observable.

3 thoughts on “Judgements versus Observations”