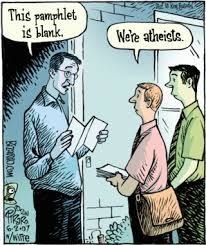 So, recently I read Jack’s post over at Atheist Revolution concerning free expression and the difficulty atheists have with just that: being able to actually say what we want without any fear of repercussion. I agree with that sentiment and of course, it’s more than apparent online that there are those that wish we’d just go away.

Think I’m exaggerating?  I also saw a tweet that reinforced just this:

I wouldn’t complain about internet atheists so much if they’d just go away.

Yep, some people just want us to go away. They don’t want to hear anything we have to say or maybe don’t believe we have the right to state what we want. Of course, with social media, it’s easy to not hear what may offend your sensibilities: you can choose not to follow that person, block or mute them. There! Now all those nasty atheists won’t disturb your precious fantasy world.

Of course when I see any disparagement of atheists, I smile. No, I don’t become angry or outraged in the least. The reason is that these same people may be unaware that a neighbor down the street, or even a colleague at work, may in fact be an atheist.  Of course most atheists don’t go around announcing their non-belief to any and all, whether they want to hear about it or not.

When I see statements like above, I wonder if people actually get the concept of free expression at all or is it only their words that are allowed to be heard? If someone doesn’t like having their beliefs challenged, no matter what is entailed, maybe they should not use their platform with the sole purpose of attempting to bait others that do not share the same.

I wonder what they would think if actually no one took their bait? I think that would be interesting. Sometimes, just ignoring stupid is just as good a tactic as engaging with it. Of course, for some atheists, it is a way to at east attempt a serious dialogue, to show others that no, we don’t hate GOd, and no, we’re not unethical or immoral. But I wonder ow many are convinced?  I’d like to thin that we can make inroads with believers but when the message that they hear is that atheists are evil, spawn of Satan, immoral, etc., there doesn’t seem to be a whole lot we are able to do to dispel what they are indoctrinated to believe.

We always like to talk about the 1st Amendment, and how everyone deserves the right to express their beliefs and opinions, no matter how unpopular they may be at the time. That same amendment though is a trap for those that want to limit some expression because as we all should be aware, once we try to prevent – and possibly succeed – in limiting another, we may find ourselves in the same position.

4 thoughts on “They Just Want Atheists to Go Away”