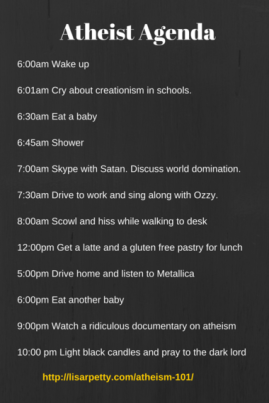 Most of those I talk to that know I’m an atheist always want to know what is the agenda of atheists? I don’t know where anyone gets the idea that atheists, as a whole, have some sort of agenda. Sometimes, facetiously, I want to say that yes, we indeed have an agenda, as if there is some mysterious Atheist Cabal plotting something nefarious, but I think better and just say that I’ve never heard of any specific agenda.

What would be the agenda if we atheists, as a whole, had one? From where I sit, I can’t place my finger on anything I would consider an agenda by atheists. Sure, we want to uphold the freedoms we all enjoy – not being persecuted for what we believe or not believe as well as keeping a separation of church and state, but does that qualify as an agenda?

I don’t think so because there’s nothing ideological about any of that.  We can be politically liberal or conservative and  hold those views.  In fact, no one has to even be an atheist to agree with those ideas. If there is an agenda somewhere, it’s being kept a very close secret and as we all know, more than a few people involved would not be able to keep a secret like that.

I do ask why there is thinking that atheists have some agenda, but I never receive a satisfactory response.  It’s always something to the effect that we want to destroy religion. Personally, I don’t want to destroy anything, but I do think that life would be better for everyone if religion had less overall influence. If that’s an agenda, which again is not ideologocal nor is it just something that atheists want, then there it is folks.

I think that atheists are too diverse to have a specific agenda. Unlike a political party, we don’t have a platform that we all vote on, and if there were a platform, I think I could guarantee that not everyone would agree with it.

There’s no reason to be afraid of atheists.  We don’t have an agenda to conquer the world or rend society asunder. We’re just regular folks – like everyone else.

12 thoughts on “Is There an Atheist Agenda?”