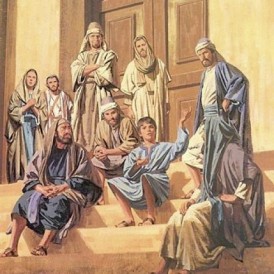 Some stories in the bible, I just don’t get and never have. I often wonder how, when I was a Christian, I used to sit in church and, at least in the beginning, never question certain scripture that was being read that day. We all just seemed to take for granted that there was some larger meaning, interpreted for us of course, that we were just too dense to understand.

One story I learned early in life comes from the book of Luke, the 2nd chapter. This is the only look that we have of Jesus as a child within the canon, at the end of the chapter. Starting at verse 41, we learn that Joseph and Mary have brought Jesus to the Temple at Passover. When the festival was over, they checked out of the Holiday Inn and started to return home. This is where it becomes interesting to. me, and always was:

43 After the festival was over, while his parents were returning home, the boy Jesus stayed behind in Jerusalem, but they were unaware of it.

What? How is this possible? Anyone that has children, and has even a modicum of responsibility as a parent, should know where there child is, especially a 12 year old. But no, Joseph and Mary are on the road, heading home, a full day, before they even notice their child isn’t with them.

All of us in the U.S. are aware of Amber Alerts. These are emergency notifications we can receive on our cell phones that report about missing children. They occur all the time, all around the country. I can’t imagine the panic of parents when they discover their child is missing. How long is it, when a child is supposed to be home from school, or say they were just down the street at a friends, and the parent expects to see them, before panic starts to set in? A day?

Well, that’s what we learn from Luke. Joseph and Mary seems to have assumed that Jesus was with them, somewhere with the group travelling back, and only after a day,  thought about where he was.

Then they began looking for him among their relatives and friends. 45 When they did not find him, they went back to Jerusalem to look for him. 46 After three days they found him in the temple courts, sitting among the teachers, listening to them and asking them questions.

Three days. They had no idea where he was for three days. Children’s Services anyone? Does this sound believable at all that a parent, even 2,000 years ago, would not know where there child was for even a day, much less three? Of course, they confronted him:

48 When his parents saw him, they were astonished. His mother said to him, “Son, why have you treated us like this? Your father and I have been anxiously searching for you.”

So, it’s the kids fault that the parents just happened to leave him behind in a strange city, not noticing for an entire day that he wasn’t with them? It’s a story that just doesn’t make sense in any way other than as contrived, as we know, to show that even as a child, Jesus was wise beyond his years. In fact, the first verse I recall ever memorizing in Sunday School as a young child is Luke 2:52, “And Jesus increased in wisdom and stature and in favor with God and man”.

That’s the point of the story, but it’s odd to me that the author had to make up a missing child story to make that point. No one that I knew then, or know now that are Christians, find this story to be the least bit problematic. I wonder how many of them, upon leaving church with a child supposed in tow, would wait a day to notice their child was missing?

5 thoughts on “Poor Parenting to Make a Point”