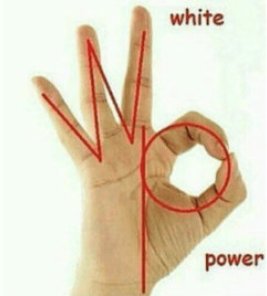 I reject the moniker of White Supremacy. I’m an older white man that in today’s political atmosphere, must be a racist, simply because of my race. It’s curious to me to see people that were born white in society to disdain something that they had no control over. Think about it: all of us, of any race or ethnicity are born that way. We didn;t choose to be white, brown, or black. I object to the idea that the condition of my birth defines me when those making these accusations know nothing about me, or anyone else for that matter. Unlike those that are white that discuss this problem in our country, I don;t walk around displaying my friends of color to show that I am not a racist. I don’t talk about race, to anyone, because I don’t care.

If you’re a human being, I look up you as not someone of a particular race, but as someone that I’d like to know. Martin Luther King, Jr once said (paraphrasing here) that people should not be judged on their color, but on their character. I can’t speak for anyone else, but I may say specifically, that’s how I was raised – before MLK.  My Dad was in the military and I was born into the “integrated” military, made possible by Harry Truman. When I was growing up, I lived next door, across the street, etc., from people of every race: black, brown, asian, Native American…In 1968, I had neighbors on base that were an interracial couple. 1968. None of us, kids anyway, thought anything about it.

So, I wasn’t raised to be racist even though both my parents were. They were born in a time when non-whites where looked down upon and yes, persecuted. I was raised to respect everyone – that deserved respect, no matter their race, ethnicity, religious belief – whatever. This is why I reject the idea that white people, generally, are racists. This is something that some politicians, and political activists  want to advance to divide us as a people, and it disturbs me to no end that many will not stand up and declare that they are not prejudiced against others because of their race. It’s almost become a silencing technique of some that will say that if you’re white, you have no voice. What?

Does racism exist? Certainly. Is it specific to the U.S.? No. Racism is a malady that exists everywhere to some extent and I actually doubt it’s prevalence in my country more than any other. The difference is that we have race-baiters out there on television discussing how bad we, as a country, are. Yet, the number of hate crimes, based on race here in the United States is at it’s lowest ever. Of course, we can never convince those that blame every incident on racism, but them, we never will be able to convince charlatans who seem to have the media presence to admit to that fact.

Which brings me to the media, which seems to feed upon this virtually non-existent problem. These people love the idea that every instance of a police encounter with someone of a race other than white, is racist. Note however they won’t report the devastation in some minority communities due to…racism, caused by those of a particular political party, in charge,  that they will go out of their way to excuse. Someone point that out? You’re a racist.

I’ve never held my tongue and I hope by writing this, more people will stand up, no ,matter their race, to say that the problem we see with race in our country is exacerbated by those looking for political contributions and none of which are looking to solve any problems we do have with race in this country. I’m not a racist. I’m not a White Supremacist. I don;t accept you derision for being born the way I was, nor will i apologize for  something that I had no part.

Maybe, instead of accuising one another we should begin to bring each other together. That doesn’t sound like something a conservative would say, does it? It’s actually something conservatives have been saying for decades.

2 thoughts on “I’m Not a White Supremacist”