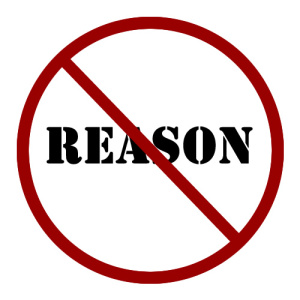 Ever notice that it seems more and more people today are just operating off emotion instead of reason? We can find it everywhere, not just in political discourse,  but everywhere in our lives. I would have thought that by now, in the 21st century, that we’d have more people of reason than those that live by those tenets that specifically reject anything to do with the same.

Although we are seeing a decided decline in religious belief in western countries, we see little to validate that anywhere outside of certain western countries. In the United States, we’ve seen a marked increase in those that reject religion, but for what? I don’t think it means anything other than people are walking away from specific denominations that have been traditional in their families for generations. nothing of this says anything about the growth of reason, or a rejection of any god belief.

We’re still living in a society where it’s unacceptable for most to openly reject the God of the bible,  and that those that do, may actually be openly discriminated against. I’m not particularly discouraged, it’s just that as much as some may want to tout how we’ve grown up, I see very little of it.

Being an atheist doesn’t necessarily make someone rational or a person of reason. It just means one thing only and has nothing to do with what the person believes otherwise. The same with most believers I know. Just because they believe in a god doesn’t make them irrational, in general,  no matter how much many of us would like to think that’s true.

I know that we atheists like to consider ourselves as people of reason, and being rational about the world  we live in, but just take a look around of those you know, and others you’re familiar with online. How many would qualify under either definition? Some, for sure, but not all.

We’re uat as susceptible to nonsense as anyone else. It would be great if people would stop to think, but then, we’re only human.