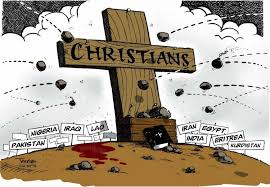 I was perusing social media and came across a tweet that caught my. attention. Mostly, I see a lot of what I’d refer to as drivel there, but this tweet had me pause. It was overtly outlandish, just someone’s opinion about the state of religion in America today. It was just 2 simple sentences, one of which I may actually agree with, the other, I thought was just plain silly.

it’s no longer safe to be a practicing Christian in America.

it’s no longer safe to be a practicing Jew in America.

That was pretty much  it and as I said, I can agree with one of those – the 2nd sentence –  as it does appear there is a rise in anti-Semitism in this country today.  Before anyone reading this places the blame on Trump supporters, remember the WomensMarch who’s leadership if so rife with anti-Semites that major supporters of this year’s march, backed out. Yes, even that paragon of anti-hate, the SPLC couldn’t condone some of the statements and actions of the leaders.

But even more than that, it was the first sentence I have to say that I disagree with 100%. How is it not safe to be a Christian in this country anymore when the vase majority of the population identifies with that religious belief?

I seem to write about this alot,  but Christians are not being persecuted. What they dislike is the fact that every time they try, legislately, to impose their belief on the rest of the country, they are shot down by the courts. As they should be. No one gets, or deserves special consideration based on a religious belief. Someone that translates to these as being persecuted.

I don’t think Christians really know what persecution is;  and I would encourage them to look around the world to get an idea of what  religious persecution really is nowadays.  Here, in America, Christians are perfectly safe  from governmental interference. No so much elsewhere.

I don’t know where some people get the idea that it’s not safe to be a Christian in America. I would like one of them to explain it to me, but I doubt I ever will see or hear an explanation. It’s easier to just whine about it.

4 thoughts on “It’s Not Safe to be a Christian in America?”