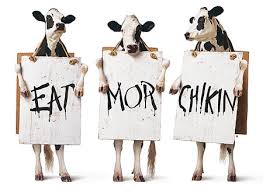 I read recently that the City of San Antonio, Texas, have refused Chik-Fil-A  permission to open a store at their airport, citing the companys anti-LGBTQ stance and their donations to groups that are anti-LGBTQ. Buffalo Niagara Airport, more recently, denied Chik-Fil-A accomodation at their facility for the same reason. As most are aware, Chik-Fil-A is a Christian, family owned business. The question is should any business be banned from a public facility based on their religious belief? As long as they don’t directly discriminate against anyone, the answer should be no.

The company’s  view on marriage being between a man and a woman is what started the discriminatory efforts against Chik-Fil-A. In 2012, CEO Dan Cathy gave an interview where he stated (I pulled this quote from this article):

We are very much supportive of the family — the biblical definition of the family unit. We are a family owned business, a family led business, and we are married to our first wives. We give God thanks for that … we know that it might not be popular with everyone, but thank the Lord, we live in a country where we can share our values and operate on biblical principles.

This started calls for boycotts of the restaurant around the country. Chicago and New York City attempted to ban them from their cities. Both failed because there was a backlash of their citizens against a ban – and not just in those cities, but all across the country as people that supported Chik-Fil-A lined up in the hundreds at their nearest restaurant to purchase lunch or dinner for themselves or their family.

Some college campuses attempted the same: not allowing Chik-Fil-A on campus. Although initially successful, state supported schools could not sustain the ban.

In Texas, the Attorney General, Ken Paxton, is investigating on whether San Antonio’s decision is religious discrimination, which would be a violation of federal law. That the airport is publically funded (taxpayer) should end the investigation – for both airports actually.

Although I personally do not agree with the company stance on LGBTQ, I believe they have a right to hold their belief. No one is compelled to purchase anything from any business and even though Chik-Fil-A may be on the wrong side of history, I believe, at least in the United States, they are on the right side of the law.

One thought on “The Demonization of Chik-Fil-A”