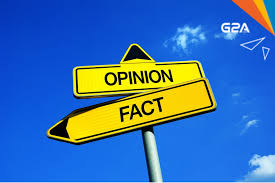 It happens to everyone. Sometimes we’re just wrong. It doesn’t matter how long we’ve held a certain opinion or belief, when presented with evidence that refutes what we have always considered as fact, we should accept it, humbly, and move on. That’s the way science works. Over years, even decades, new information is developed that gives us a different perspective on what had been considered settled in the past. It’s a good thing, in that we expand and improve our knowledge in some area of science. The same should be applied to our knowedge in other subhects as well. We shouldn’t be cowed by popular opinion, or that which appears to be politically correct views.

We all have opinions, some are based on gathered facts. Some are not. Opinion is tricky that way. We have inherent biases and sometimes they’re difficult to overcome. The worst of the worst, to me, are those opinions based on facts, but those facts based on our own bias, cherry-picked so that we may continue to believe in something that is actually not proven. We have an obligation to at least attempt to push through our personal biases to get to the truth. Not just my truth or your truth but what it is that can, with all the evidence presented, be the truth.

I believe we have an oblgation to ourselves to not accept everything we hear or read, even if it’s from a trusted source, as sometimes the facts are corrupted by opinion. We see this all the time in the news we consume, whether it’s online or on television. We’re attracted to those sites and channels that comfirm our bias as to what we believe we already know. Few people will actually look at the other side of an argument to try and determine of there’s any validity to it or not. We seem to want to make the leap that whatever it is, it must be wrong. We’re all guilty of this on occasion, sadly.

We shouldn’t dismiss voices that are contrary to our own but encourage discussion and debate; Test each others proofs, and discard those that are shown to be untenable. We should also be able to identify the logical fallacies that are often presented.

For those that choose to hold on to ignorance and delusion, you have every right to do so but don’t ever expect to be taken seriously.

2 thoughts on “When Opinion Meets Fact”